Listen to our audio version below.

They lived on the outskirts of Budapest in a cave selling discarded junk for a living. Their mother had abandoned them and died years before. “We knew our mother came from a wealthy family but she was a difficult person and severed ties with them, and then later abandoned us and we lost touch with her and our father until she eventually died,” Geza Peladi, 43, told ATV television (from The Telegraph Dec. 2, 2009 edition).

Apostle Paul, a Jewish man, came to know Jesus Christ in a personal, life-changing way. As he travelled throughout the Roman Empire preaching the Good News of Jesus Christ, a group of teachers spread the idea that circumcision and the observance of the Mosaic Law were necessary for salvation. The church in the Roman province of Galatia was influenced by this group called Judaizers.

Paul wrote to the church in Galatians 3:1-3:

“You foolish Galatians! Who has bewitched you? Before your very eyes Jesus Christ was clearly portrayed as crucified. I would like to learn just one thing from you: Did you receive the Spirit by observing the law, or by believing what you heard? Are you so foolish? After beginning with the Spirit, are you now trying to attain your goal by human effort?”  —NIV

You can approach God by toiling.

In verse 3, Paul’s rhetorical question [“After beginning with the Spirit, are you now trying to attain your goal by human effort?”], takes his readers back to their spiritual starting point when they received and embraced the Gospel. “All who rely on observing the law are under a curse, for it is written: Cursed is everyone who does not continue to do everything written in the Book of the Law” (Galatians 3:10). Since he was a Jew and had been a Pharisee, Paul knew as well as anyone how difficult it is to keep Moses’ Law. How about you?

Do you rely on observing the Law and being a good person so that you may have a relationship with God and receive eternal life? If yes, you can’t pick and choose which laws to observe. If you break one law (e.g. do not lie, do not steal, or do not covet), then you have broken them all!

Each one of us struggles inwardly. The law helps us to realize how weak and sinful we are. If we are satisfied with our own righteousness, then we can’t receive the sacrifice of the Lamb of God on our behalf. However, when we realize we can’t measure up through our own works, then we are not far from the kingdom of heaven.

Are you satisfied with your own efforts? If yes, I can’t help you yet. Have you grown weary of trying to be good enough? Then let’s continue …

You can approach God by toiling, or by trusting. 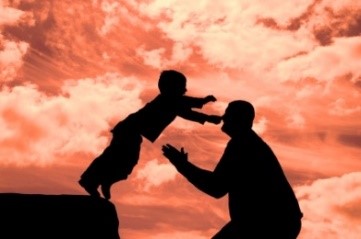 Does God give you his Spirit and work miracles among you because you observe the law, or because you believe what you heard (Galatians 3:5)? The weeds of legalism pop up in our hearts when we equate the moving of the Holy Spirit—in us, amongst us, and through us—with being good enough or mature enough. We enjoy these manifestations of God’s presence only by grace through faith!

Consider Abraham. “He believed God, and it was credited to him as righteousness” (Galatians 3:6). Even though Abraham lived about 1,900 years before Christ, he was a man way ahead of his time. Relationship with the Lord has never been about trying to be good enough; it has always been about trusting and obeying Him.

Now that faith has come, we are no longer under the supervision of the law (Galatians 3:25). When you’re ready to live by faith, you start to live from your heart rather than from rules. Tragically, this way of living is not grasped by many people sitting in the pews of North American churches who are still “trying to be good Christians.” Ironically, the result of living from your heart is not lawlessness as we often fear, but a deeper, more profound purity that radiates from within.

Who, or what, are you going to trust?

There is neither Jew nor Greek (South African nor Finnish, Kenyan nor Australian, Nigerian nor Filipino), slave nor free, male nor female, for you are all one in Christ Jesus (Galatians 3:28). Yes, we all bring diverse cultural, social, and gender influences into our relationships as fellow believers, but the King and the culture of His kingdom supersede any of these differences.

If you belong to Christ, then you are Abraham’s seed, and heirs according to the promise (Galatians 3:29). Through our faith in the Messiah—the promised son that was foreshadowed by Abraham’s son Isaac—we become children of Abraham.

Servants toil for wages from their masters, while children trust their parents for an inheritance. We receive a paycheque because we have earned it, but we receive an inheritance because of a family relationship.

Old Testament priests were instructed by God to wear cotton garments rather than wool garments (Exodus 28:42). Ezekiel 44:17-18 tells us why this had to be. They were not to sweat in God’s presence. There was to be no smell of human flesh when they approached God, but only the sweet savor which speaks of the perfections of Christ. Linen keeps one cool, while wool makes one sweat.

You can approach God by toiling or trusting—our family inheritance is received, not earned.